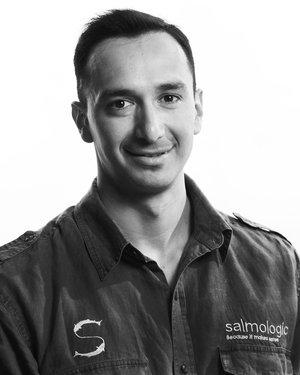 Diego Castillo lives in Rio Grande, in the state of Tierra del Fuego, in Patagonia, Argentina. He has been fishing the famous river Rio Grande since he was a child, always fighting the equally famous (or rather infamous) wind that characterises the southern parts of Argentina. The Patagonian wind is a demanding fly fishing “instructor”, but it’s free and (if you work with it) effective. Some of us have seen Diego cast and fish and we can safely say that he really knows how to do both! After fishing and guiding for so many years, he also knows the Rio Grande incredibly well; the different pools, the secret spots and how to find the different runs of sea trout.

He started guiding for the Despedida Lodge in the Rio Grande at the age of 18 and found that he really liked the essence of teaching other fly fishers how to catch fish. A good guide is always fishing – even when he is without a rod and a line – because he does so through the fishermen that he is guiding, by using the vast experience gained through his own fishing.

Diego guided for two years in the Rio Grande and then for six years in another sea trout river further south, Irigoyen; a demanding smaller river in the middle of a forest. He never forgot his “first love” however, and in 2005 he moved back to Rio Grande to guide for the beautiful Aurelia Lodge, which he manages today. He is an experienced fly fishing instructor, teaching efficient Scandinavian Spey casting to fly fishers visiting the lodge. With a degree in Physical Education, his knowledge about the human body makes it easier for him to teach fly casting. The same laws of nature and the same principles of human motion apply equally to sports and fly casting.

Diego’s first experience with Henrik Mortensens and his approach to casting and fishing took place in 2009, when he tested some of his designs. He immediately took to this new and different concept of double hand fly rods. After having studied Henrik’s entire production of fly casting DVDs, he finally met him in person in the beginning of 2010 and this, Diego says, represented the highlight of his fly fishing life so far. Since then, Diego and Henrik have given demonstrations together in both Chile and Argentina regularly. His favourite salmologic rod for normal to low water fishing in the Rio Grande is the Skyborn 11’ 18grams/278 grains. However, in high water conditions, he prefers the Skyborn 13’3’’ 28 grams/432 grains. “A fantastic rod for medium to long casts with bigger flies”, he says.